28 September 2021:  Benugo is set to expand its partnership with Cooking Sections (Daniel Fernández Pascual & Alon Schwabe) and will feature as part of the duos Turner Prize exhibition, 29 September until 12 January 2022.

The collective will support a long-term process to help transform the food offered at cultural institutions across the UK into a menu that addresses the climate emergency.   The relationship was born out of the Serpentine’s long-term interdisciplinary project Back to Earth which this June saw Cooking Sections work alongside Benugo to add CLIMAVORE dishes to the menu at the newly opened The Magazine restaurant at the Serpentine.

Becoming CLIMAVORE enables participating institutions, including the V&A, Serpentine, BFI Southbank, Science Museum, and Ashmolean Museum to catalyse the transformation of people’s desires and habits, engaging society in a collective long-term process that will re-imagine existing food justice models and create new ones.    In this way, the Turner Prize exhibition can be experienced by people across the UK as well as in Coventry itself, where the exhibition is being held.

The first step in Becoming CLIMAVORE is to remove farmed salmon from menus. The second step sees Cooking Sections work in collaboration with Benugo to create new CLIMAVORE products using filter-feeders and regenerative coastal ingredients that have a positive effect on marine ecology and proactively respond to the ecological challenges in the waters around the island, including foraged Cornish seaweeds and ocean greens.

Both products will be pre-packaged and presented in boxes produced by NOTPLA.  Most paper-based products contain synthetic chemicals that act as a water and oil repellent. NOTPLA have specially sourced the paperboard for the CLIMAVORE box to be free of these materials. To make the boxes grease-proof and water-resistant, they developed a coating that is 100% made of seaweed and plants, and naturally biodegradable in weeks.  The boxes are recyclable, home compostable, and naturally biodegradable.

CLIMAVORE dishes feature permanently on the menu at The Magazine which opened in June this year in the Zaha Hadid extension of the Serpentine’s North Gallery.  Created alongside Benugo and head chef Tomas Kolkus, they include Soda Bread with Seaweed Butter and Scottish Rope-Grown Mussels with White Wine, Garlic, Urfa and Sea Fennel.

Shane Kavanagh, Commercial Director at Benugo, comments: ‘We are delighted to expand our collaboration with Cooking Sections on their Becoming CLIMAVORE project by bringing it to life at some of our partner cultural venues across the UK, as part of a wider movement. Sustainability improvements in food often translate as doing less harm, and the opportunity to learn about, and experiment with, ingredients which actually have a regenerative effect on ecology and do positive good has been immensely exciting.’

Daniel&Alon, Founders of Cooking Sections add “We are delighted to be working with cultural institutions across the UK and Benugo on Becoming CLIMAVORE, a project that questions how we eat as humans are changing the climate. CLIMAVORE works to reimagine and transform food systems in response to the climate emergency by addressing ocean pollution from open-net salmon farms. In participating restaurants, farmed salmon has been removed from the menu and replaced with ingredients such as seaweeds, sea vegetables and bivalves, which improve water quality and cultivate marine habitats.”

Becoming CLIMAVORE postcards will be shared with the cafes and restaurants at all participating institutions across the UK; when put together, the 12 individual postcards make a poster replica of part of the Cooking Sections’ Turner Prize installation. 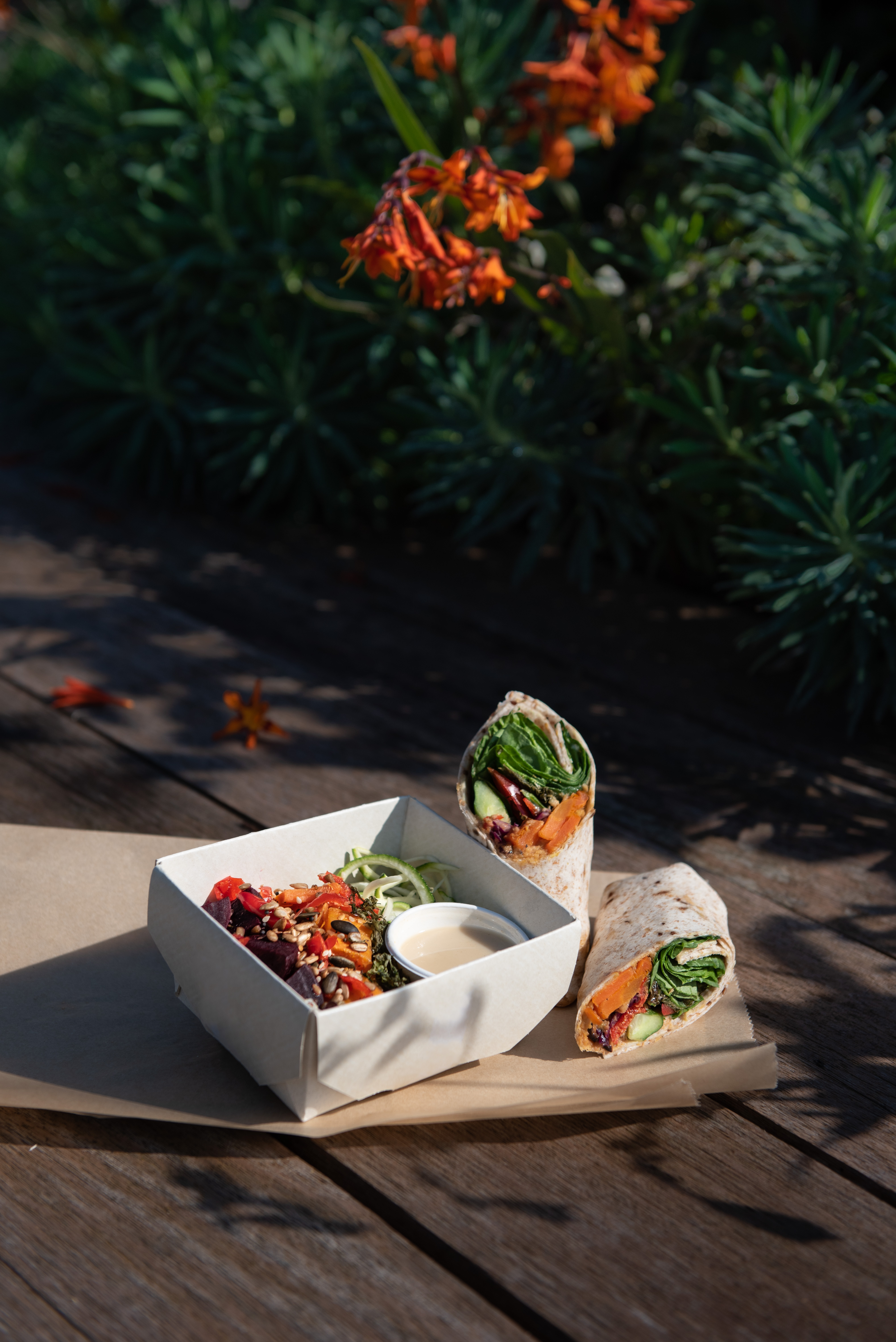 Benugo was founded in 1998 in Clerkenwell, London, by brothers Ben and Hugo. They had a vision of not just creating superb, natural food but of giving London something that was a real experience. This vision is still true today.

The Benugo brand stretches from award-winning high street stores to cafes and restaurants within some of the world’s best-loved public spaces and high-volume visitor attractions such as the V&A, The Royal Parks, The British Museum, BFI Southbank, Edinburgh and Stirling Castles and John Lewis stores throughout the UK.  A strong retail discipline coupled with an independent and entrepreneurial spirit underpins the whole brand.

As the hospitality industry works towards a more sustainable future, Benugo strives to make better choices and is constantly updating policies in line with this.   Benugo has introduced wooden cutlery and paper straws, salad bowls are made from 70% recycled plastic or press cardboard, napkins are made from 100% recycled paper, all fruit and yoghurt pots are created using recycled plastic and are recyclable, hot drinks are served without lids unless customers ask for them (this reduces plastic lid usage by 60%), and all plastic bottles are recyclable. Benugo also has its own endlessly refillable, infinitely reusable aluminium water bottle; refilling it just 10 times avoids 70g of plastic waste and 790g of CO2 emissions.

CLIMAVORE asks how do we eat as humans change the climate? Initiated by Cooking Sections (Daniel Fernández Pascual & Alon Schwabe), this long-term project collaborates with cross-sections of society – from experts in ecology, marine biology, agronomy, nutrition, and engineering, to local farmers, fisherfolk and schoolchildren – to propose adaptive forms of eating that respond to the climate crisis.

The project originated and is based in the Isle of Skye, where in collaboration with ATLAS Arts it began exploring the side-effects of open-net salmon farms, their global footprint and local impact. The extended practice of battery-farming salmon has significant environmental, social and economic repercussions, ranging from artificial colour pigments added to the fish to supplement dietary deficiencies, and excessive use of antibiotics to kill sea lice. In response, CLIMAVORE initiated a programme of activities, working with local communities to explore forms of eating that go beyond ideas of sustainability. Instead, its aim is to think about environmental regeneration by promoting filter-feeder ingredients that proactively respond to the ecological challenges in the waters around the island.

The project began with an installation in the form of an oyster table, which served as a water filter for non-humans at high tide, and as a dining table for human discussions at low tide. It went on to develop three strands of activity. Learning, via a multi-year education programme delivered in partnership with the island’s high school, to offer Hospitality and Professional Cookery students an introduction to regenerative aquaculture, which continued into apprenticeships with local restaurants. Growing, which is working towards the development of an innovative intertidal system for cultivating seaweeds and bivalves as a form of habitat. Building, which will follow the development of new materials from regenerative aquaculture waste.

Cooking Sections examines the systems that organise the world through food. Using site-responsive installation, performance and video, they explore the overlapping boundaries between art, architecture, ecology and geopolitics. Established in London in 2013 by Daniel Fernández Pascual and Alon Schwabe, their practice uses food as a lens and tool to observe landscapes in transformation. They have worked on multiple iterations of the long-term site-responsive CLIMAVORE project since 2015, exploring how to eat as humans change climates. Their work has been exhibited at Tate Britain; Serpentine Galleries; SALT Beyoğlu, Istanbul; 12th Taipei Biennial; 58th Venice Biennale; the U.S. Pavilion at the 2014 Venice Architecture Biennale amongst others. They lead a studio unit at the Royal College of Art, London. Cooking Sections are nominated for the 2021 Turner Prize.

One of the world’s best-known prizes for the visual arts, the Turner Prize aims to promote public debate around new developments in contemporary British art.  Established in 1984, the prize is named after the radical British painter JMW Turner (1775-1851).  Originating at Tate Britain, the Turner Prize regularly travels to other venues in the UK.  It has previously been shown in Liverpool in 2007, Gateshead in 2011, Derry in 2013, Glasgow in 2015, Hull in 2017, and Margate in 2019.  In 2022 it will be held at Tate Liverpool.

The Turner Prize 2021 exhibition is a highlight of the Coventry’s UK City of Culture 2021 celebrations.  Herbert Art Gallery and Museum champions Coventry’s culture, city and arts and is one of the UK’s leading regional museums.